I started writing in 1983, just tagging and doing throwies with neighborhood guys. When I read Getting Up by Craig Castleman, I was inspired to start doing pieces. Then Subway Art and Style Wars came out and I was obsessed with graffiti as an art form. I would go on solo paint missions because no one else wanted to join me. They were happy with tagging while they were hanging out and getting high, but that wasn't enough for me.

I started to Paint as Greed in 1990. I painted with Roler and Ivory, TM7 crew. We did a few walls in Brooklyn and they were very memorable. The best ones were at Tilden High School. By 1992 Cortes (Waqs) and Este were ready to get down with the action. This was going to be the first production that I was going to do with all of them together, A3 and TM7 crew on one wall.

Tilden was a gem of a spot because the neighbors, school, and police wouldn’t bother you if you were doing quality burners. The five of us planned out our pieces and put them up on the wall. After we painted our pieces, we started to freestyle and just kept filling up space on the wall.

The yard had eight handball courts with a fence in the middle. We took four of the handball courts, half of the yard, to paint on. The following weekend; Asis, Web, Dil, Shone and Abby came through and took the other four handball courts in the yard.

I feel like I had a lot of growth as a writer within just doing this one wall. You can see my Greed piece is pretty mechanical, angular, and didn’t have much dimension.

As we were filling in the rest of the wall, Cortes was going on about "graffiti is dying" so we decided to paint a “Graff is Dead”. I knocked out the “D”, “E”, and “D” for the dead and the letters were flowing, the colors had dimension, It was a big accomplishment for me, a lot of artistic growth. 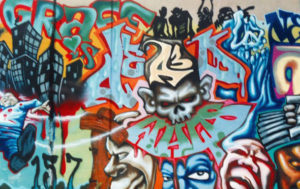 Este did the “ENDoom”, He always had a bold letter style as you can see in his main piece but the “END” was intricate. 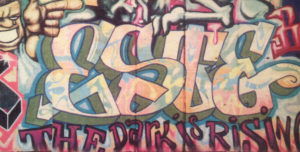 Roler busted out the Uzi with his established style that became a staple of the TM7 crew. Cortes was filling the wall with characters like an addict on a mission. 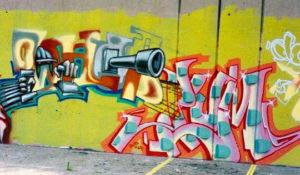 His Waqs-Tank piece was just pure genius. The wall ended with Ivory doing a "2 Kind" piece that also had similar dark blue hues that I started the wall with, it was a classic TM7 burner.

This wall makes me feel like I accomplished something big in New York City graffiti history, especially after it was featured in The Source Magazine. 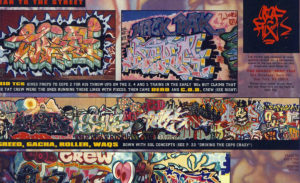